Day 1 (7.7): My first day of work went swimmingly! On my way home from work I stopped in Trader Joe’s for some groceries… I wasn’t expecting to end up in the middle of the Produce Wars. Holy Moly! People were screaming and swearing… and I was sure any moment someone was going to throw a blow and turn the whole damn store into a messy battle ground. The space is limited so the store isn’t that large… the line literally wrapped around to the back (yes, really) of the store. People – including myself – just wait in line and shop as the line moves, picking up yogurt here and some broccoli there once the line moves passed what you’re looking for. It’s quite an ingenious plan, I think. As entertaining as it was, I don’t think I’ll be going to TJs at 6pm again.

I lugged my two bags into the subway – which didn’t have any air and was packed with rush-hour-goers. As I was panting on my way home (happy to breathe some fresh air) I realized how happy I was to have been slammed in a train car with a bunch of morons who don’t know how to move to the middle of the car (gathering at the doors and making it hard for new people to come onto the train). I was ticked. It was great.

The things that make me happy.

Day 6 (7.12): This week flew by… and quite frankly, the only thing I had energy for once I made it home was to eat and sleep. My week has been full of work, gym, a couple happy hours (Amuse on the LES has an open bar for 2 hours for $15…  not the greatest idea), and eating home-made dinners promptly followed up by passing out. I’m working as a customer service rep at Handybook, so if you ever call for help… perhaps I’ll be there to answer :]

It’s Saturday. My first ‘weekend’ in 8 weeks. I forgot how awesome days ‘off’ actually were when you have days that are ‘on’. I’m loving my new job and all of my new co-workers, but it’s nice to have a break.

I woke up this morning feeling refreshed — I went to sleep pretty early last night after a 1.5 hour gym sesh, spaghetti dinner, and a chick flick — and decided I want a clean apartment. So I cleaned. Everything. Felt so good.

I haven’t really had much outdoor time this week and have been looking forward to going to Smorgesburg for the first time this summer! Smorgesburg is one of my favorite events in NY… it’s held in a couple of different locations in Brooklyn, but on Saturday’s its right on the coast of the East River in Williamsburg. Essentially, it’s a weekly food festival with some 100 vendors creating the most amazing dishes. I’m not sure what took me so long to go! 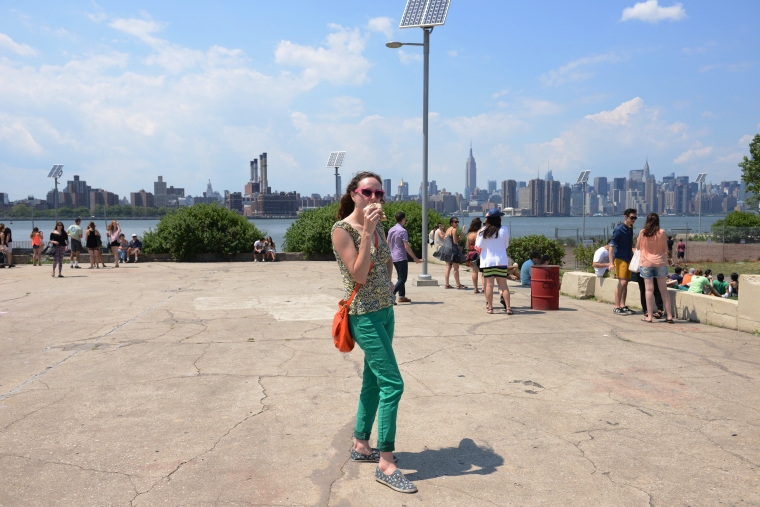 It was packed with fellow hungry-goers, but the lines were well worth it. I had some chicken creole mufongo… which of course I didn’t take a picture of. This was my first time eating mufongo and I’ve gotta tell ya – it was pretty awesome. I followed the savory dish with a giant ice cream sandwich. 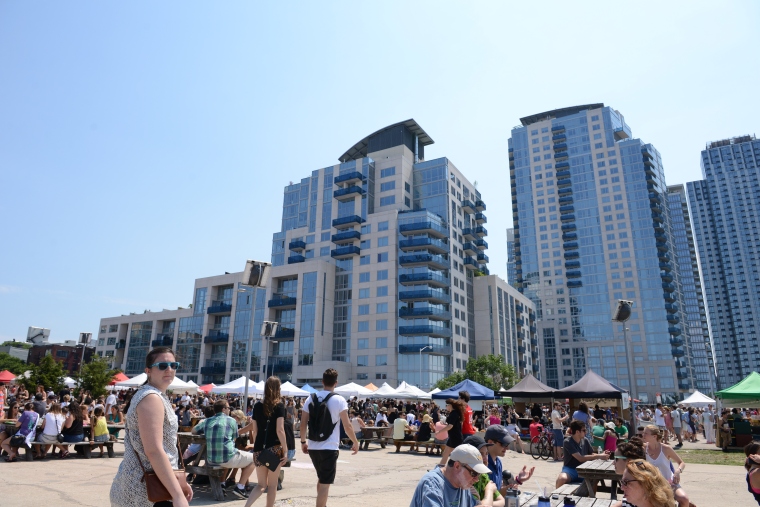 It was a very sunny day, but I didn’t feel uncomfortable… it was lovely.

This evening was equally as lovely as my afternoon!

Hanging out at Washington Square Park is one of my favorite things to do in the city… and its free. The park is overcome with characters! Older gentlemen playing chess with anyone willing to put up a fight, children laughing on the playground, doggies squirming around in their small doggie park, little ones playing in the fountain (one day when it’s super hot, I’m going to join them), ballet performers, a couple of yogis doing their yoga thing, a pianist rocking out on a grand piano under the trees, and everyone else gathered to enjoy the scene. A wonderful place to spend my late afternoon! 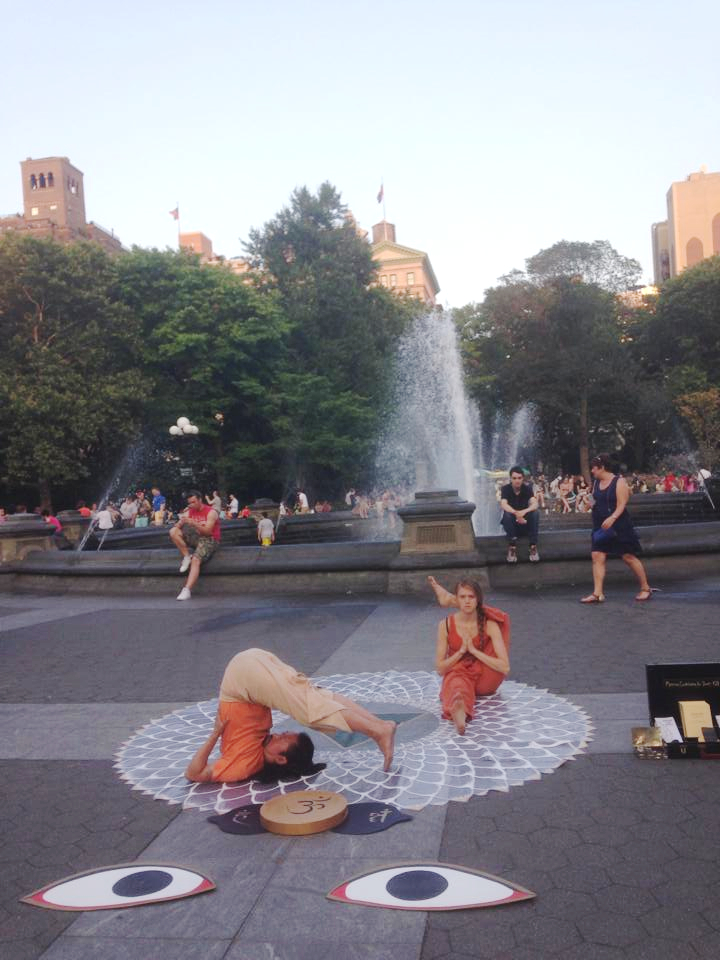 Day 7 (7.13): Before I moved I had this weird disillusion that NYC was clean. It’s not. Multiple times a day I see people littering without a second thought (hence all the trash along the sides of streets) and every so often I’ll get the loveliest whiff of rotten something or other intermingled with urine as I walk through an intersection. Not to mention Chinatown’s own god-aweful stench –my nose protests my being there every time. Although I haven’t seen it myself, I’ve heard multiple people mention seeing shit on the subway (I’m having second thoughts about sitting). And today I saw someone’s dinner from last night (I’m assuming) hurled all over the orange seats in the A train. It’s not clean. Not even remotely. Some parts of the city are cleaner than others, for sure. And the subway stations definitely have the ugly siblings and the upscale cousins. Of course I would prefer not to be subjected to smelling the unique combination of human feces and trash, but it’s just a part of living on a tiny city with millions of residents (plus millions more tourists). Lots of people (many of whom are without a home) + not much space + heat = stinky times. I saw some ads in the subway trying to get restrooms into subway stations — maybe that will help. Maybe not. I don’t really care.

I was riding the subway this morning having a longwinded debate on whether or not I should ever sit on the subway again (all in my head of course) when an older latin couple walked onto the train and began playing and singing. I see this couple every so often and I love them a little more every single time. I don’t even know them. This strange affection towards complete strangers is what I love most about NYC. I love these people. All of them. Even the extremely creepy ones. New York isn’t perfect. That’s what makes it perfect for me. 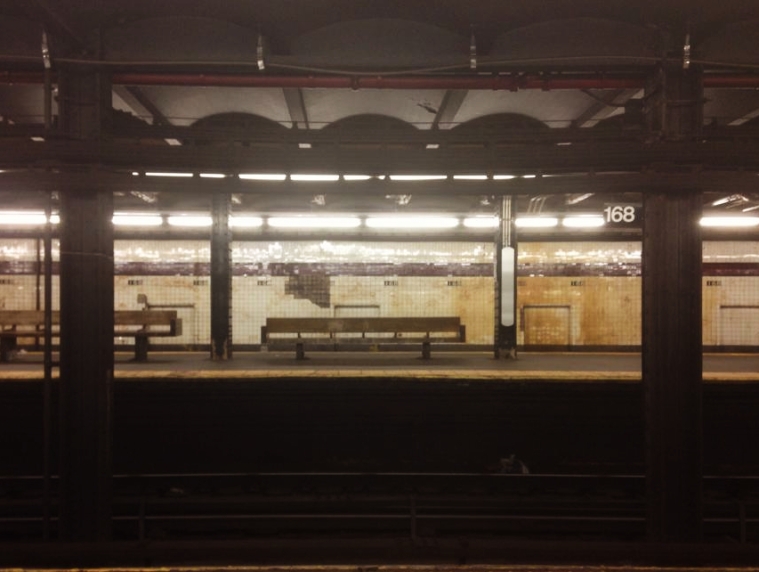