7.29: This morning after leaving my apartment building and feeling the chill of the wind pushing through my duck studded sweatshirt I was greeted with the funky-iest of sights. A slim, not scrawny, older gentleman (in his late 60s) wearing dark denim pant overalls on top of a pale pink button up shirt, turquoise Nike high tops, and a dark gray fedora came riding by me (waving joyfully) on a tiny blue bicycle that looked as old as he. It was 6.45am.

I woke up early today feeling groggy and cold. I started my day wearing my favorite sweatshirt and favorite [I love NYC] smile.

7.30: Last night after working and grabbing an unbelievably delicious Indian roll at Masala Times [YUM], I hopped into an Uber car and headed towards the airport.

[That wrap though. SO good.]

I’ve been planning to surprise my parents in Orlando with a visit – however quick. I arrived at their home a little after midnight. It took a couple of doorbell rings and a phone call to finally get them to open the door, but success was inevitable. My mom was shocked. I’m not shocked.

Today was a beach day with the whole fam (including my brother who is also visiting from far away lands).

8.1: You know that scene in HIMYM where the gang breaks out into song of everything that they do/feel all in fabulous musical theatre style? I was crossing 6th ave today after hopping off the stuffed rush hour A train at West 4th, when a small crowd of people parted and I saw a young man moving towards me in a series of sideway sashays and forward leaps all the while singing a song [of which I only caught ‘it’s the loveliest day to sing a song’]. Nobody blinked. I giggled gleefully all the way to the restaurant.

I was gone for 2 days. I missed the city so.

8.2: Right as I stepped on to the street  from my office building I was slapped square between the eyes with the most pungent odor resembling what I would call a fishy home-made wine [one which was created w/ the stomping of rotten fish with bare sweaty feet].

The evening was doomed. I was tired and I still had to go grocery shopping and figure out how I’m going to make do without doing laundry until Wednesday (more on that later). Just as I thought all hope was lost I heard… “OH! I wanna dance with somebody… OOHHH with somebody who loooovees me” blaring from a silver Toyota looking car parked along the side of the street. The back door was swung open and a pair of huge muscle-y legs were hanging out on the tips of which held the tiniest little pink furry kitten heels.

I’m not sure who was sitting inside – I was too distracted in conversation – but whoever it was made my night. The entire subway ride to the store and home I had the song stuck in my head. Instead of holding it in I decided to to sing out loud. I enjoyed myself immensely. I wish I knew more of the words than just the 2 phrases.

I pretty much skipped around Manhattan singing the same words over and over without a care in the world.

8.3: Today I’m wearing my very last [ and by last I mean clean]  pair of pants with one of my very last shirts. I’ve been sorta putting laundry off. I’ve been trying to wait a whole month before doing laundry and I’m not so sure that was a good idea.

The thing is, like many folks in NYC I do not have the privilege of a washer/dryer in my building, much less in my apartment. There were a few things I knew I wasn’t going to ‘rough out’ when moving here… doing my own laundry at a mat was one of those things. It takes forever, it’s hot as hell or freezing cold, and I’d much rather just pay someone to pick up a bag of dirty clothes and get clean ones dropped off.

Anyway…I finally got a hold of the laundry man (who happens to have the cutest accent) today. wOOHHOO! The little things that make me happy.

Today I got a really disturbing phone call which turned out to be a scam call. I have never felt so much hatred towards a human. I’m hoping this is nothing several beers and episodes of HIMYM can’t solve. 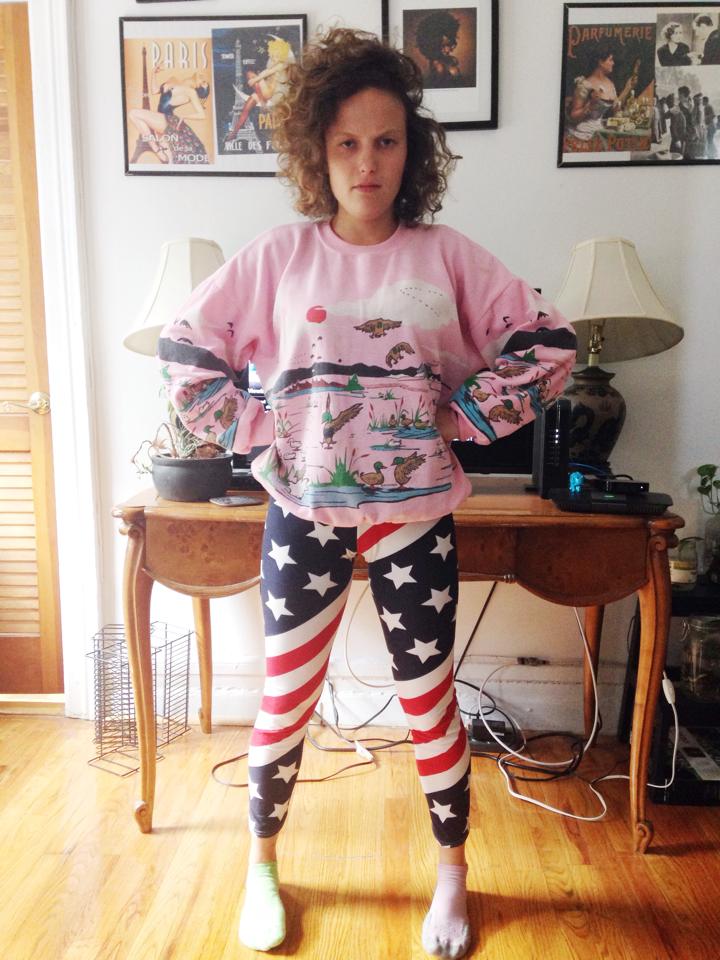