I’m currently sitting in a sweaty basement filled with British bros playing a soccer video game waiting for my laundry that I’ve been trying to do all day (there’s one washing machine for the entire hostel that probably houses some 50 ish people (or more)). And I lost my headphones.

I’ve been traveling for a little over 5 months now and even though I wanted to keep writing on here it’s pretty clear that’s not happening. I have been somewhat updating my Instagram if you’re actually interested. I was thinking about this topic (the things I’ve learned from traveling) the other day while I was waiting 3 hours for a bus… 50% hungover and mostly alive. The idea of bus stations was totally foreign to me five months ago. And quite frankly the thought of them scared me. This prompted me to think about how different I am today from just 5 months ago. Then I thought about how little I’ve actually written and…

So, here it goes. I’m not really sure what I’m going to write — but it’s going to be good because surely I’ve had to learn something, right?

1. Bahrain is a country.

Holy shit you guys. Did you know this? My knowledge of geography has continuously embarrassed the shit out of me. And it’s not THAT bad, but still. Every non-American I’ve met has a *solid understanding of the countries in this world and where they are on a map. For fucksake. Do you know where Dubai is on a map? What about Oman? Egypt? Morocco? Munich!?! Which are countries and which are cities? I definitely couldn’t pin point these on a map before I took off — I’ll be honest. Can you? Because you really should. We all should. I was at a tiny bar in a small alley (aka street) in Sevilla where a bunch of Couchsurfers were gathering and I met someone from Behrain. Do you know what that is? I’d never even heard of it before that moment. Thankfully I wasn’t the first person to be like “sorry, where?” But still. Just the beginning of ‘my American is showing’ (see below). 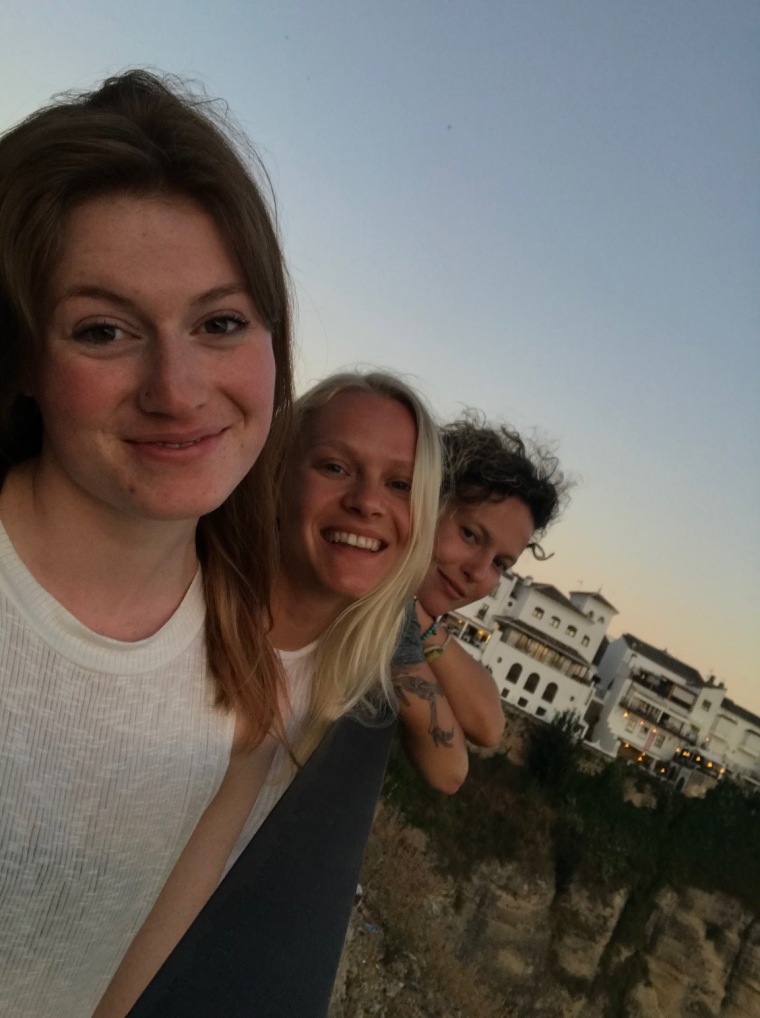 Rhonda, Spain — Rhonda was built on a ledge right next to a giant gorge. It legit has the most spectacular views I’ve ever seen. We hiked up from our hostel (we were staying down below the city with million dollar views) to catch the sunset and have some tapas.

When I took off one of my biggest concerns was my age. I knew plenty of people backpack through Southeast Asia, but I assumed they were all 20 or at the very most 23. It has been my sincere delight to meet people *mostly* my age (28) or older. Hallelujah. Sure, I’ve made the mistake of going to the wrong hostel here and there where the oldest person there was me (yikes), but that’s only happened a couple of times. Cheers to people my age doing their thing and traveling — even if it is just for a few weeks or months.

3. My American is showing.

Ok, so I’ve mentioned my lack of geographical knowledge (which I’ve since been eagerly trying to fix)… But then there’s everything else. Setting the AC (or asking for the weather) is all in Celsius — because the rest of the world knows what’s up. Kilometers and kilograms are used for distance and weight. At first I was finding myself reaching for my phone as often for conversions as I did for translations. I’m semi happy to say I now have a relative understanding of Celsius (I would be dead without AC) and Kg, but the whole distance thing is still very foreign to me. Aside from these trivial things there’s the whole world relations thing — I read the world news semi-regularly now, but before my travels it just made me sad so I didn’t. Most people I come across have a very* solid understanding of what’s going on in the world — all over the world — and have formed at least some sort of educated opinion. Me? Um….. Working on it.

Florence, Italy — “LOOK AT THAT!” When I first got to Europe my senses were overwhelmed. I could barely stop my heart from jumping out of my chest and was pointing at every. single. building.

Like right now. I’ve been in Madrid for 2-ish days and I’ve barely looked around. I’m tired. I don’t want to walk around any more. I don’t want to try and figure out yet another public transit system. I don’t want to Google translate yet another conversation. I just want to sit and eat some good food and watch some Friends. But I lost my headphones and I have to wait for my laundry in a room filled with screaming bros. So yea, sometimes this isn’t as fun as it sounds. Although for the most part — it’s awesome.

I’ve been off on this adventure of mine for five months and have so far hit 5 countries (although I’m not sure my 2 day stint in Malaysia counts) — Taiwan, Southern Thailand, Malaysia, Italy, Spain. While in Europe I’m trying to stick around countries with similar cultures so that I can avoid burn out and avoid having to adjust to the culture shock every week… Italy and Spain are (in my experience) pretty similar in that they really like to slow shit down. There’s an actual Siesta here in Spain (and some parts of Italy that I visited). Like everything* shuts down and there’s nothing for you to do other than take a nap yourself. I LOVE this. I took a proper siesta every day while in Granada and it was pure magic. I was talking with a local in Rhonda and he was telling me that the Siesta is really only during the summer months and is mostly because of people who work outdoors (though I don’t understand why the entire city shuts down). Whatever the reason — I love it. I could write a whole post alone on all the things that were different in the other places I’ve visited (um, hello Taiwan!), but Spain is currently at the forefront of my mind. I love it here. I love the slow pace of things. I love the friendly people — who have ALL been so patient with me and my broken Spanish. Rarely did any of them break into English which has made practicing my Spanish so much easier. Anyway. Spain (and Europe) is so very different from the States. Nothing opens until like 10am, dinner is at 10pm and people really love to take their time eating here. I asked for an Advil the other day and nobody knew what I was talking about (my American, once again, was showing).

I went from eating an extremely nutritious low(ish) calorie diet to Gelato, Bocadillos (tiny cheap sandwiches), wine, potato omelets, tinto de verano, more Gelato, pasta, Jamon, much more wine… on and on and on. It’s fair to say I’m surprised my clothes still fit (grateful that most of my pants are stretchy yoga pants). Normal Regina would be FREAKING out. Like for real. I’ve spent the majority of my adult life with fitness being the focus of my life in one way or another. And yes, I practice yoga daily and I’m strong af but unfortunately a ‘bad’ diet (as I’d like to call it) is a bad diet. Is it unfortunate? Most days I don’t think about this AT ALL — until I snap a photo of myself and am like WHOA, who is that? Honestly, I just don’t care. This is my life right now and this is what happens when you eat like I’m eating. I’ve started to incorporate a weeeee bit more of a balance — trying to eat a salad when the kitchen in my hostel doesn’t make me want to puke. But I’m not going to stop drinking all the delicious wine or eating ALL the gelato because when I’m done with this journey I’ll be back to eating my Tempeh & Kale on the daily.

Granada, Spain — This was at a Carmen (an inclosed garden) up in the Albacin neighborhood with an EPIC view of the Alhambra. The folks at my incredible hostel told us about a free concert happening here and of course we couldn’t miss it.

Almost all of the plans that I made prior to taking off months ago have been replaced with new plans. I spent an entire year reading about Southeast Asia and have barely seen any of it. Further on in my travels, I bought airplane tickets (thankfully cheap ones) that I never boarded. I stayed in cities longer than I ‘planned’ to and left some earlier than intended. One of the biggest lessons I’ve learned thus far — stop planning. Seriously, there’s no point. I have a vague idea of where I’d like to be and when, but for the most part it’s all in the air at the moment. I read about the place I’m going a couple of days (if that) before leaving and then begin to learn and figure out what I’m doing when I get there. On the other hand, there are plans that I intend to keep — like going on a trekking yoga retreat with my yoga teacher (SO EXCITED) in Nepal and going back to Thailand for several months to finally get back to training Muay Thai (I miss this more than anything else on Earth). But at this point, the whole world is my oyster. I have big dreams to float up in a hot air balloon in Myanmar and roam around the magical streets of Marrakech and teach yoga in Alaska — but where my travels will take me is unknown to me and I’d like to keep it that way.

Ok, so maybe there’s more that I’ve learned (as in a LOT) more from my travels thus far, but the basement has finally cleared and Friends is calling my name!

Have any questions? Ask!