Admittedly I didn’t really do that much research before hitting the road. So there’s no doubt a million articles and posts and books about all the things to expect from traveling the world. I didn’t read them though. All I knew was I wanted to go out and travel the world.

And here I am. Doing it up. Currently in Bosnia — where we’ve ended our Balkan road trip (more on this soon). Our little white Heeheetka (Fiat) really went through some turbulent times (literally and figuratively) as we made our way from Tirana, Albania — > Sarande, Albania –> more Albania –> Montenegro –> Mostar, Bosnia — > camping near Kravica Waterfalls –> Sarajevo. 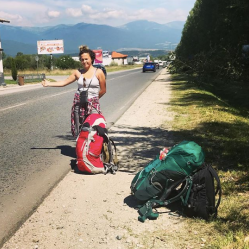 There’s so much to say about this part of my trip. And I think I’ve finally figured out a way to make consistently writing on this blog a thing… So keep your eyes peeled.

And while I have a few drafts composed, I can’t possibly release anything without adding some photos and editing for all of my grammatical errors — and there are many; some are accidental while others are there for fun. I’m going to skip out on editing this one, so please forgive me.

For now here are a few things nobody told me about traveling the world — most likely because I never asked.

1. You’ll get used to a life with wasps.

No, but really. I think it all started on a beach in Albania for my brother’s birthday. We packed a FEAST of a meal to enjoy on the beach only to get mauled by an army of wasps. They surrounded us and then went in for the kill. Nobody got stung, of course. But they were everywhere. On my hand as I reached to grab a shrimp or on the rim of my cup as I tried to sip on the fruity cocktail I concocted. The food was eaten nevertheless, but the wasps were relentless.

Eventually I just relented on staying in the water where the wasps didn’t go. But ever since then these fuckers have followed us everywhere. Almost every meal we have is outdoors (really nice, I know) and the food is always coupled with a swarm of the yellow stingers.

Nobody told me that traveling will get me used to eating a meal with wasps zooming around, landing on my fork as I eat and even taking a swim in my soup.

I don’t have any pictures of the wasps… But Yoga is helping me to keep sane while eating. | Albania

2. The best gelato is in Granada, Spain.

I’m sorry, but I had a lot of gelato in Italy. And the one time I had some in Granada it blew all the others out of the water. Like whoa.

Nobody told me Granada would be home to such delicious cold treats. [Alongside being the coolest place on Earth. Too far? Maybe.]

3. Bosnian forests are epic. And the roads could use some monetary love.

There was a road in one of Albania’s ‘Highways’ that was all gravel, on the side of a steep mountain and had no barrier — so if your car skids off the edge, it will just keep going. That was a fun ride. By which I mean I had about a million mini heart attacks. But nothing compares to the roads here in Bosnia. We got ourselves into some serious pickles here. I’ve been posting a bunch about this on my Insta-stories (if you’re interested in following my travels — that’s by far the place I post most).

Nobody told me Bosnia (and apparently much of the world) has really poor roadways — and I’m not just referring to backroads.

Ok, so maybe someone did tell me this one. But my insight is this — burnout is totes real, but also totally temporary. All I need is one to two solid weeks somewhere pleasant where I can catch up on some alone time, read a book and binge on Netflix. I’m just about nearing that point and am so stoked to be in Belgrade for 9 days.

Nobody told me that burnout is real, but oh so totally fixable.

My daily yoga practice in Marbella, Spain took place in this neighborhood park.

5. It’s not THAT expensive.

When I was planning this trip, I thought I’d spend the majority (if not all of it) in Southeast Asia where the prices are far cheaper than here in Europe — even Eastern Europe. On the other hand, I thought I’d be dead broke by now and yet here I am — just fine. I haven’t exactly been frugal (like at all) and it’s still not too bad. You could easily travel for much less.

Nobody told me I’d have plenty of money to travel. Then again, math is by far my weakest link so I’m probably way off on this one.

6. There are other travelers *everywhere.

No, I’m never alone. Maybe in Taiwan… that one time. But for the most part, us travelers are all over this world.

Nobody told me I’ll never feel lonely while traveling alone. Really, I don’t. Maybe I just haven’t been alone enough?

I wanted so badly to write and read like a mad person gone madder. And yet I’ve barely written anything at all. So yea, it’s not as easy as it sounds.

Nobody told me all this free time would be taken up so quickly and recklessly.

8. Staying in shape is harder.

Ok so this I kind of knew. I knew it would be difficult… I haven’t really prioritized it. Like at all. So there’s a real reason why it’s hard. I haven’t tried. I’ve been practicing my yoga asana regularly, but I don’t treat that as a workout so much as a healing mechanism. I feel great most days, so it’s all good. I will say I am STOKED beyond words to go train for three months in Thailand starting in November. The excess will shed with training.

Nobody told me I’d get lazy and be ok with it or that I’d get SO sick of eating out.

The one day I trained since leaving on this journey. | Koh Lanta, Thailand

9. Hitchhiking is not scary.

Of all the adventures that I’ve been on this journey, I thought for sure hitchhiking would terrify me the most. People make it out to sound so damn scary. And it really really isn’t. Like at all.

I’m anxious and afraid of like everything and hitchhiking was by far the most chill experience ever. Long? Sure. Hot? Sure. Scary? Not really.

Nobody told me I’d be anxiety free getting picked up (literally) by strangers.

Trying to get picked up outside of Bonsko, Bulgaria.

10. Nobody told me, I’ll love it more than I could possibly ever know and it’ll feel so natural, so uncomfortably comfortable that I’ll find it hard to see myself living any other way.